K10 enables centralized monitoring of all its activity by integrating with Prometheus. In particular, it exposes a Prometheus endpoint from which a central system can extract data.

K10 can be installed with Grafana in the same namespace. This instance of Grafana is setup to automatically query metrics from K10's prometheus instance. It also comes with a pre created dashboard that helps visualize the status of K10's operations such as backup, restore, export and import of applications.

This section documents how to install and enable Grafana and Prometheus, usage of the metrics currently exposed, generation of alerts and reports based on these metrics, and integration with external tools.

An additional NetworkPolicy may need to be applied in certain environments.

Although it's possible to disable K10's built-in Prometheus server enabled, it's recommended to leave it enabled. Disabling the server reduces functionality in various parts of the system such as usage data, reporting, and the multi-cluster dashboard. To disable the built-in server, set the prometheus.server.enabled value to false.

If the built-in server has previously been disabled, it can be re-enabled during a helm upgrade (see Upgrading K10) with: --set prometheus.server.enabled=true.

While K10 exports a number of metrics, the jobs_duration metric is the easiest one for monitoring job status because it is already aggregated. This metric captures the running time of jobs that have completed, whether they succeed or fail.

The jobs_duration metric is a Prometheus histogram, and thus it comprises 3 "sub" metrics: jobs_duration_count, jobs_duration_sum and jobs_duration_bucket. There is a single "status" label for the metric which can take the following values: [succeeded, failed].

If you would like to track the number of applications outside of compliance you can use the metric compliance_count and check for the following states: [NotCompliant, Unmanaged]

As K10 performs various actions throughout the system, metrics are collected about those actions. Counts for both cluster and application-specific actions are collected.

When using K10 Multi-Cluster Manager, a cluster label must also be included. The cluster label should match the name of a secondary cluster or be blank ("") to query metrics for the primary cluster.

Separate metrics are collected for the number of times the action was started, ended, or skipped. This is indicated by the suffix of the metric (i.e. _started_count, _ended_count, or _skipped_count).

An overall set of metrics is also collected that does not include the app or policy labels. These metrics end with _overall rather than _count. The overall metrics should be preferred unless application or policy specific information is required.

Metrics are collected for the following actions:

For example, to query the number of successful backups in the past 24 hours:

Or to query the number of failed restores for the past hour:

Due to action metrics being reported as counters, the increase or rate functions must be used when querying. See Prometheus query functions for more information.

Additional documentation on querying data from Prometheus can be found in the Prometheus docs.

To check local backup data size you can use snapshot_storage_size_bytes, also with logical and physical types.

To enable/disable Grafana and Prometheus, use this helm value while installing/upgrading K10. The helm value is enabled by default.

Click on the "Usage and Reports" card on K10's dashboard. 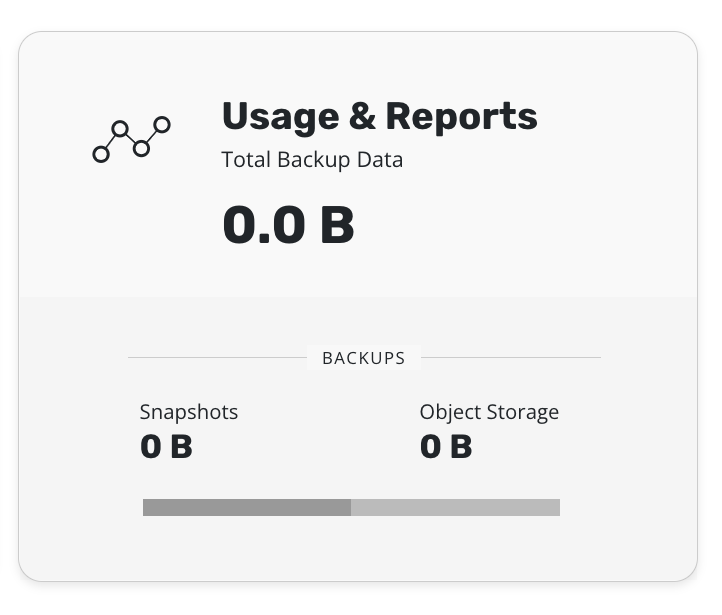 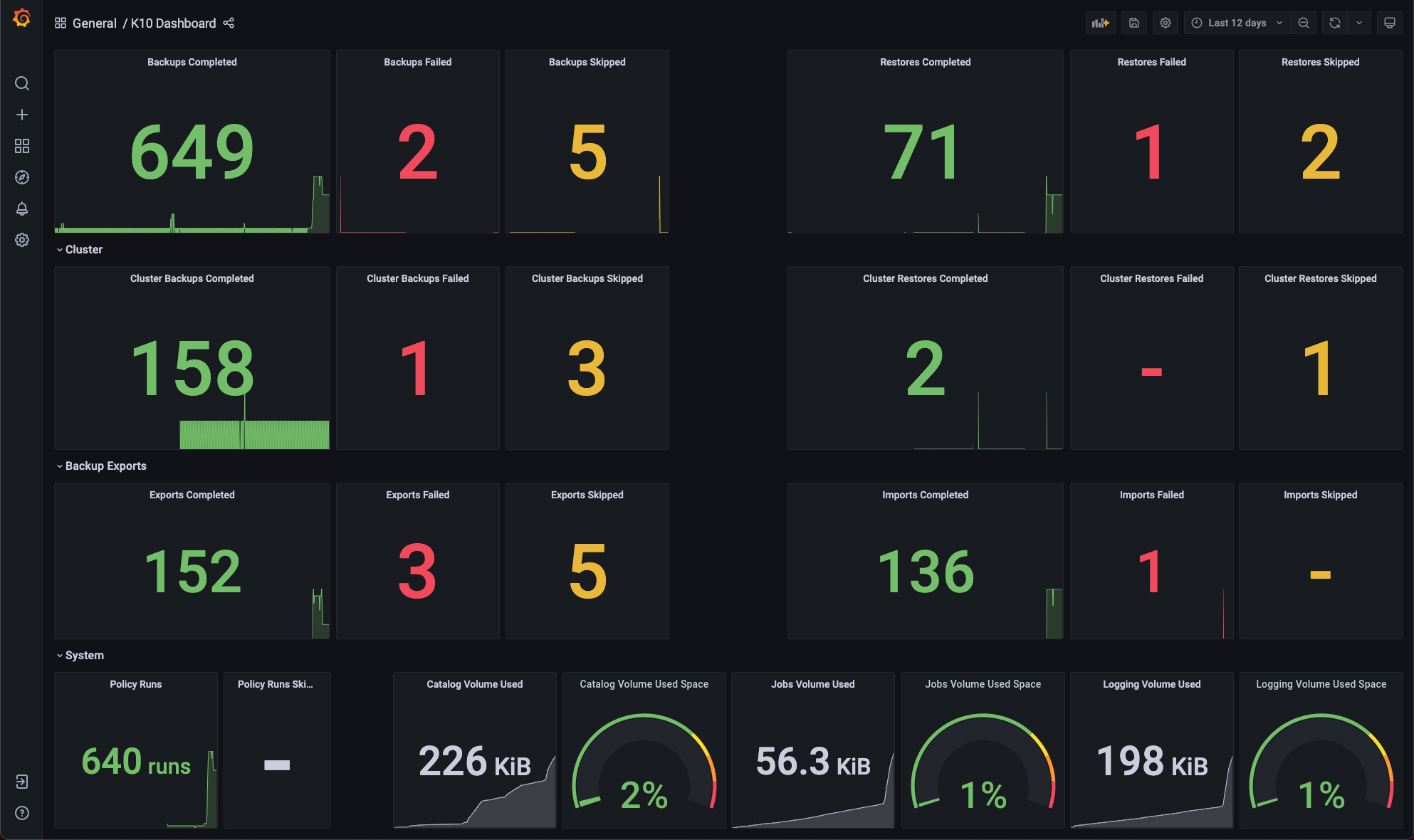 The Grafana dashboard can be used to monitor how many application scoped or cluster scoped actions (backup, restore, export and import) have completed, failed or been skipped.

It shows the number of policy runs that have completed or been skipped.

The amount of disk space consumed and the percentage of free space available in K10's stateful services (catalog, jobs, and logging) are also shown.

Grafana can be used to create alerts to get notified moments after something unexpected happens in your system. An alert can be generated by specifying a condition or evaluation criteria and, these conditions can be configured using Alert rules. Each rule uses a query that fetches data from a data source. Each query involves a metric such as the K10 metrics described in a previous section. More can be read about this by following the Grafana Alerting documentation.

There are three main constructs that are involved while creating alerts in Grafana:

The condition on which the alerts should be fired can be configured using alert rules.

A new alert rule can be created by going to the dashboard's edit option and then clicking on the Alert tab at the bottom of the page. In this example, it's assumed that a dashboard panel named Dashboard Local is already created.

In this example, datasource Prometheus and metric action_backup_ended_overall were used. 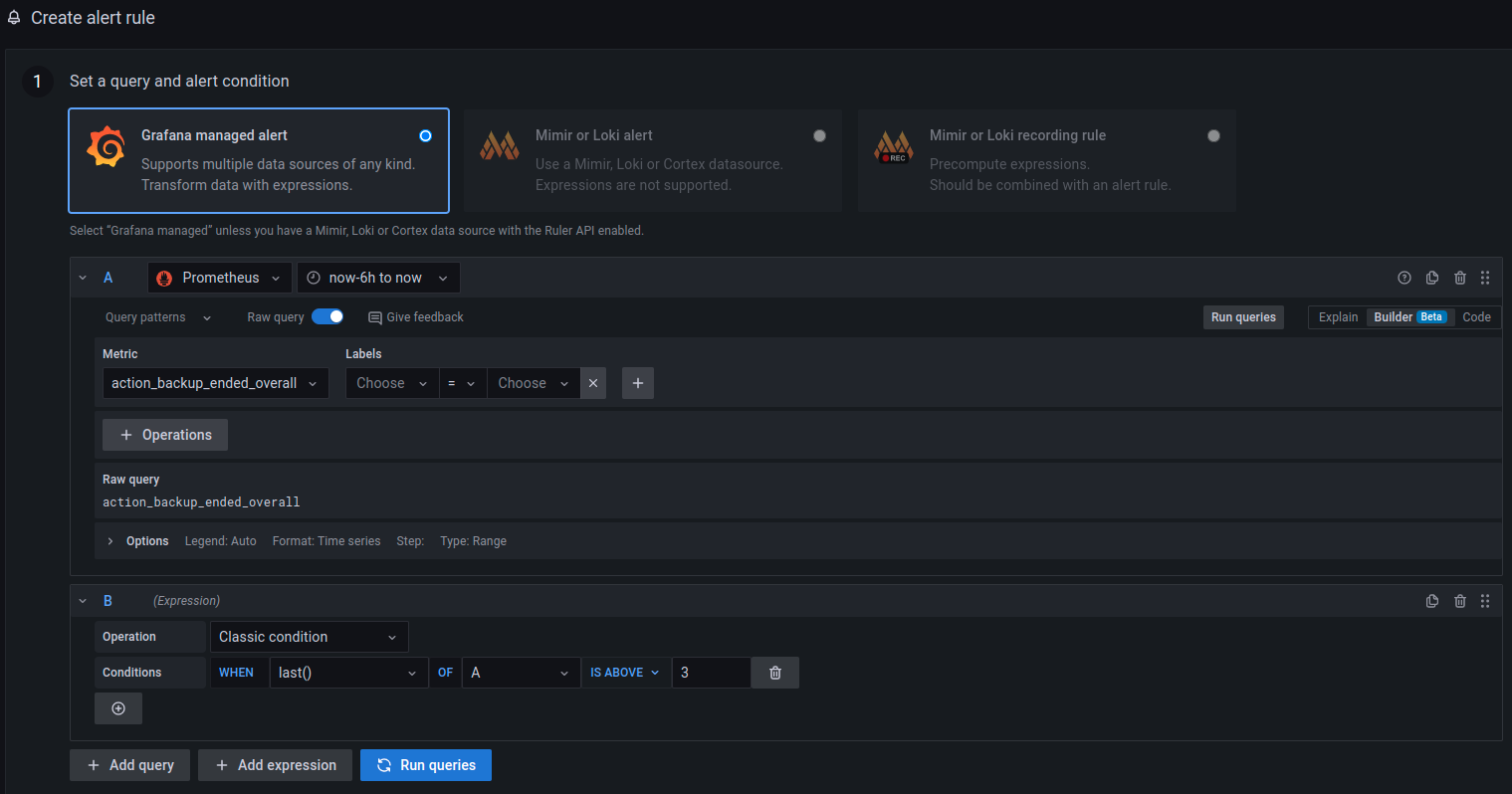 After setting the query and alert condition, the label of this alert rule can be configured by scrolling down the same page, until Notifications options.

Labels are useful to configure where these alerts are going to be sent. 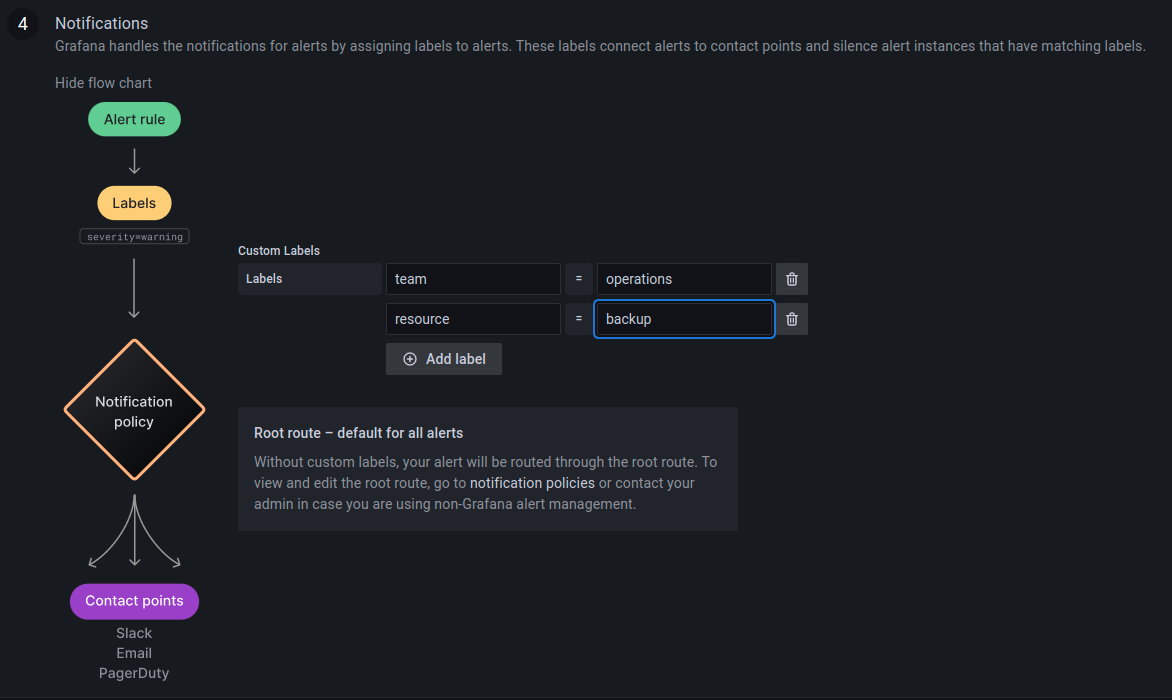 In this example, the labels team:operations and resource:backup have been used.

Click on Save and Exit to save the dashboard with this alert rule and exit.

Contact points are used to configure the communication medium for the alerts that are going to be generated. For example, in some scenarios, it might be useful to get a slack message as soon as an alert is fired. In that case, slack must be configured as a contact point. To see a list of all the contact point types, refer to this Grafana documentation. 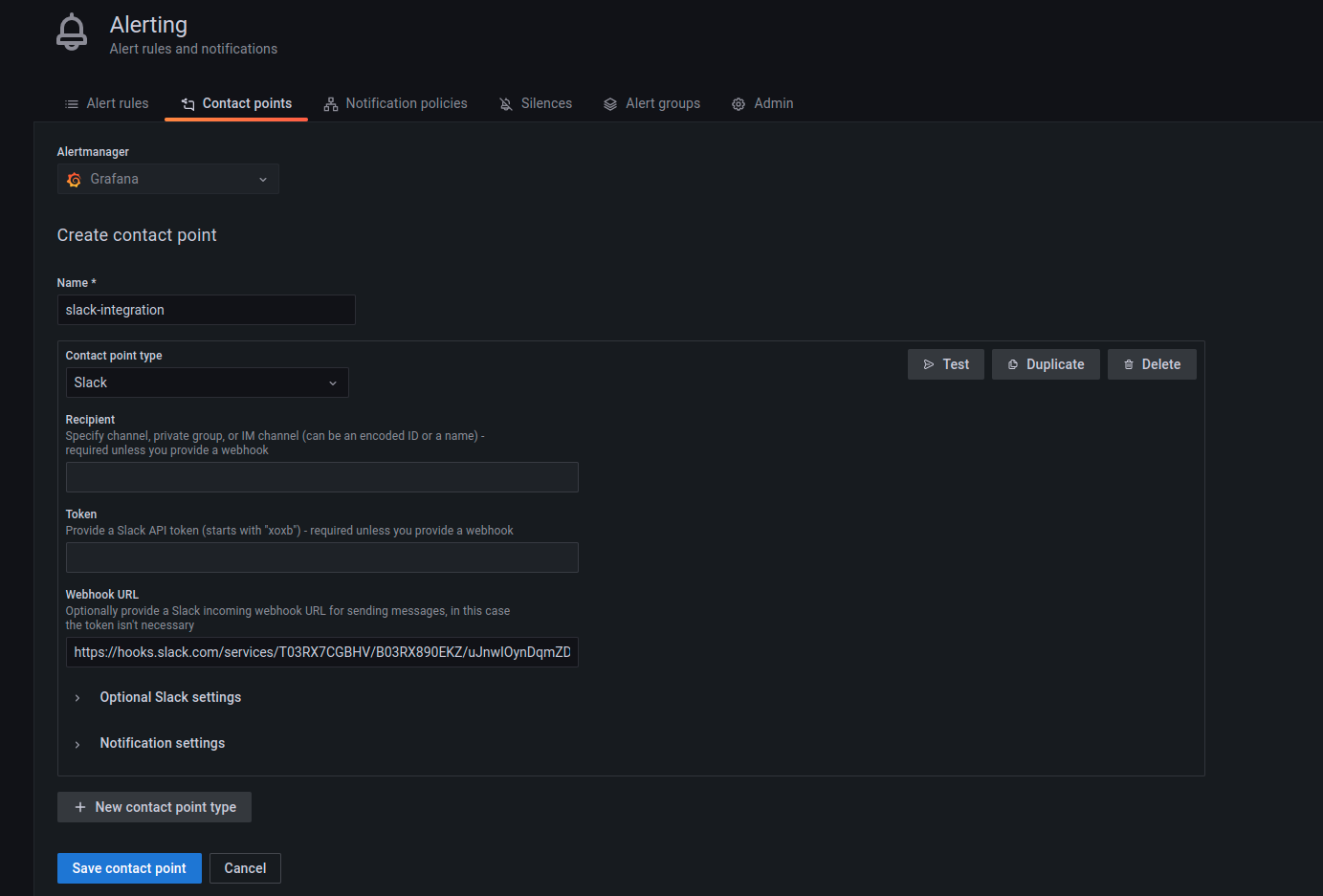 Once the alerts rule and contact points have been configured, the relationship between these two configurations is established by creating a Notification policy.

The example below uses the same labels specified while creating the alert rule in the previous step. 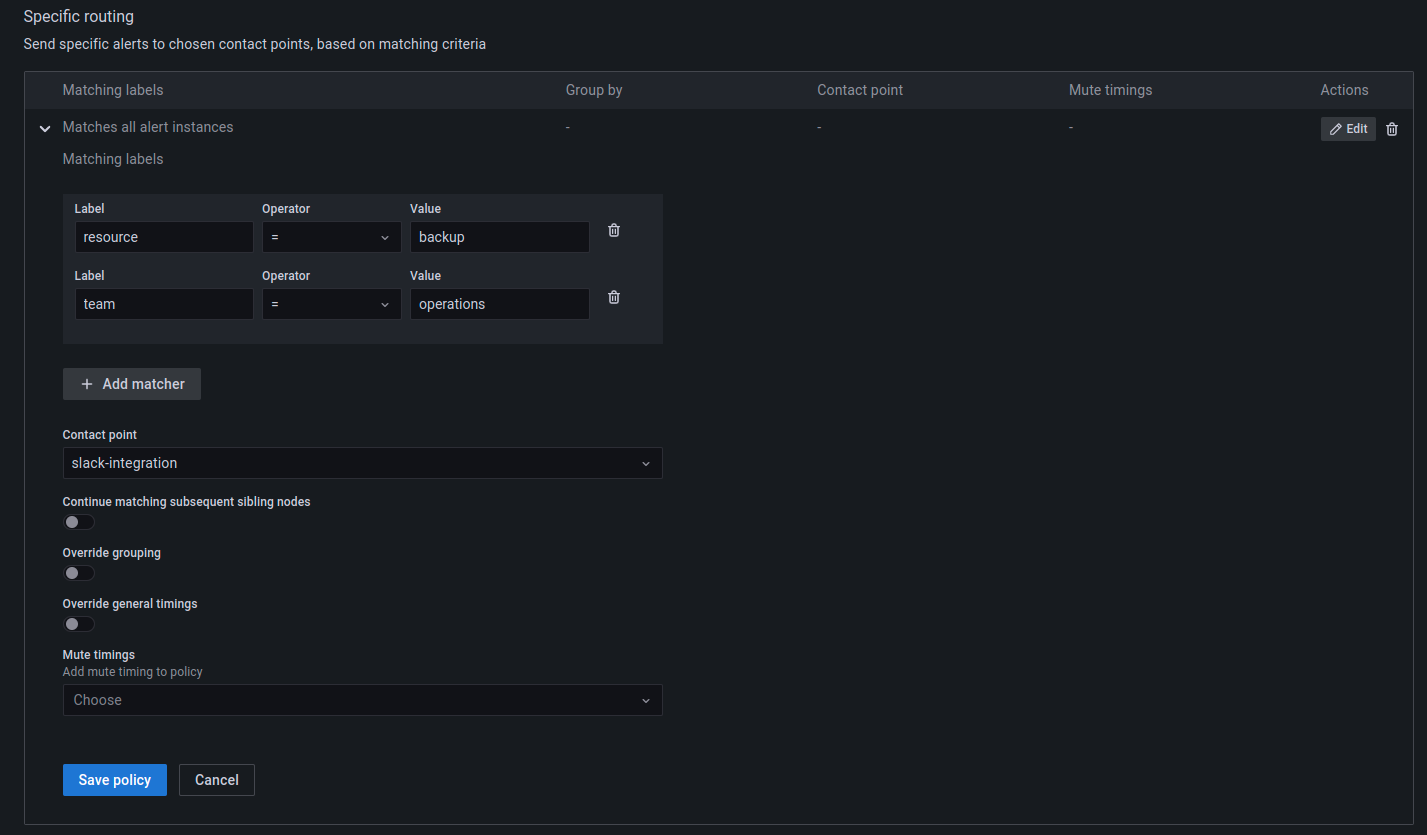 When an alert is generated based on the rule configured, notifications will be sent to the slack channel.

Update Prometheus scrape config as per instructions given below. (Note. yq utility is needed to execute commands successfully)

Add a label to the namespace where external Prometheus is installed - kubectl label namespace/prometheus app=prometheus and apply the following network policy to enable communication.

Once the network policy enables communication, all the service targets will start coming up and the metrics will be scraped.