K10 supports direct integration with public cloud storage vendors, direct Ceph support, as well as CSI integration. While most integrations are transparent, the below sections document the configuration needed for the exceptions.

Assuming that the default kubectl context is pointed to a cluster with CSI enabled, CSI pre-flight checks can be run by deploying the primer tool with a specified StorageClass. This tool runs in a pod in the cluster and performs the following operations:

First, run the following command to derive the list of provisioners along with their StorageClasses and VolumeSnapshotClasses.

Then, run the following command with a valid StorageClass to deploy the pre-check tool:

For each CSI driver, ensure that a VolumeSnapshotClass has been added with K10 annotation (k10.kasten.io/is-snapshot-class: "true").

Setting deletionPolicy to Delete isn't sufficient either as some storage systems will force snapshot deletion if the associated volume is deleted (snapshot lifecycle is not independent of the volume). Similarly, it might be possible to force-delete snapshots through the storage array's native management interface. Enabling backups together with volume snapshots is therefore required for a durable backup.

K10 creates a clone of the original VolumeSnapshotClass with the DeletionPolicy set to 'Retain'. When restoring a CSI VolumeSnapshot, an independent replica is created using this cloned class to avoid any accidental deletions of the underlying VolumeSnapshotContent.

As an alternative to the above method, a StorageClass can be annotated with the following- (k10.kasten.io/volume-snapshot-class: "VSC_NAME"). All volumes created with this StorageClass will be snapshotted by the specified VolumeSnapshotClass:

Finally, ensure that the csi-snapshotter container for all CSI drivers you might have installed has a minimum version of v1.2.2. If your CSI driver ships with an older version that has known bugs, it might be possible to transparently upgrade in place using the following code.

While the EFS CSI driver has begun supporting dynamic provisioning, it does not create new EFS volumes. Instead, it creates and uses access points within existing EFS volumes. The current AWS APIs do not support backups of individual access points.

However, K10 can take backups of these dynamically provisioned EFS volumes using the Shareable Volume Backup and Restore mechanism.

To enable K10 to take snapshots and restore volumes from AWS, an infrastructure profile must be created from the Settings menu. 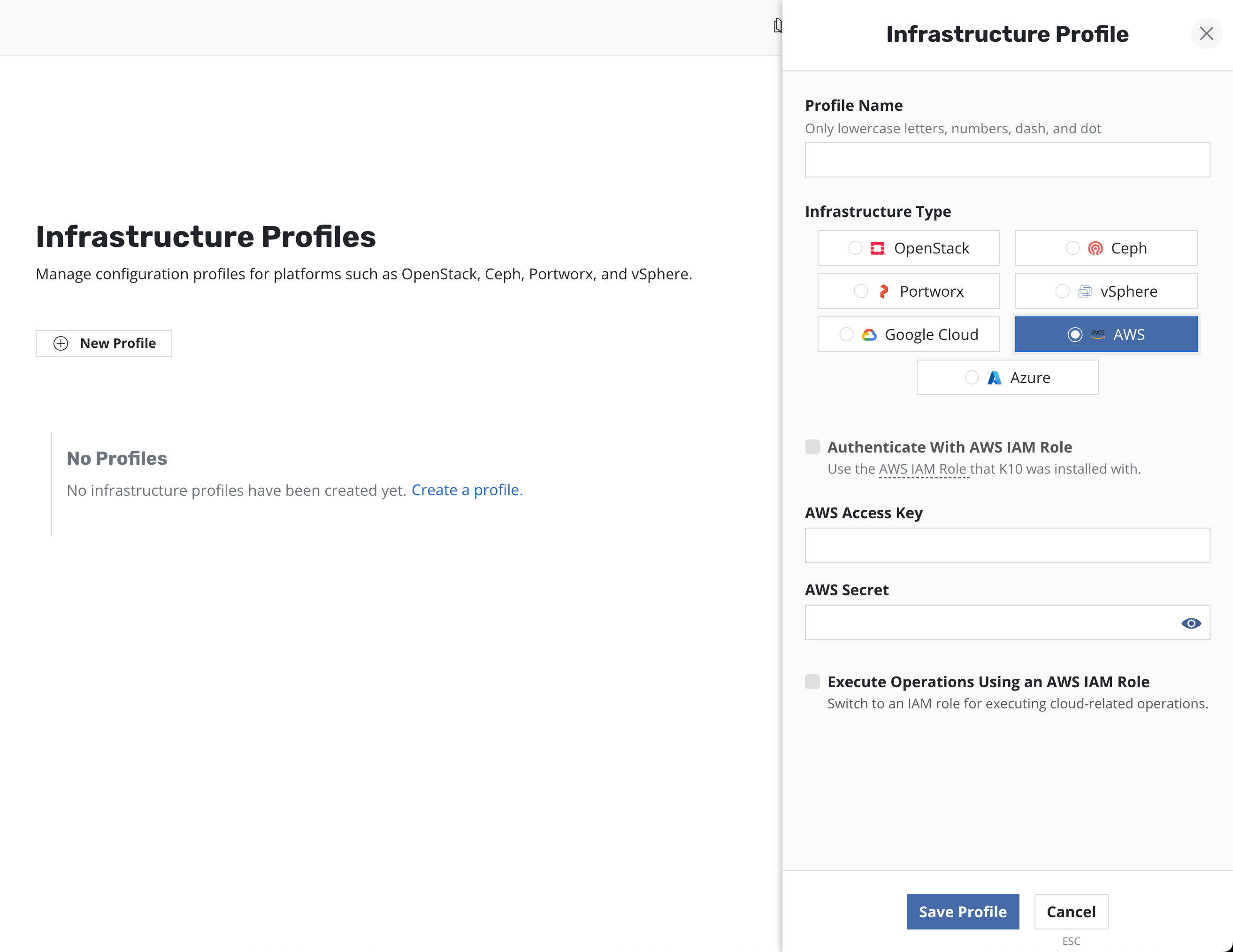 The AWS Access Key and AWS Secret fields are required. Using AWS IAM Service Account Credentials that K10 was installed with is also possible with the Authenticate with AWS IAM Role checkbox. An additional AWS IAM Role can be provided if the user requires K10 to assume a different role. The provided credentials are verified for both EBS and EFS.

Currently, K10 also supports the legacy mode of providing AWS credentials via Helm. In this case, an AWS infrastructure profile will be created automatically with the values provided through Helm, and can be seen on the Dashboard. This profile can later be replaced or updated manually if necessary, such as when the credentials change.

In future releases, providing AWS credential via Helm will be deprecated.

For integrating K10 with Pure Storage, please follow Pure Storage's instructions on deploying the Pure Storage Orchestrator and the VolumeSnapshotClass.

Once the above two steps are completed, follow the instructions for K10 CSI integration. In particular, the Pure VolumeSnapshotClass needs to be edited using the following commands.

For integrating K10 with NetApp Trident, please follow NetApp's instructions on deploying Trident as a CSI provider and then follow the instructions above.

K10 supports Google Persistent Disk (GPD) storage integration with both CSI and native (in-tree) drivers. In order to use GPD native driver, an infrastructure profile must be created from the Settings menu. 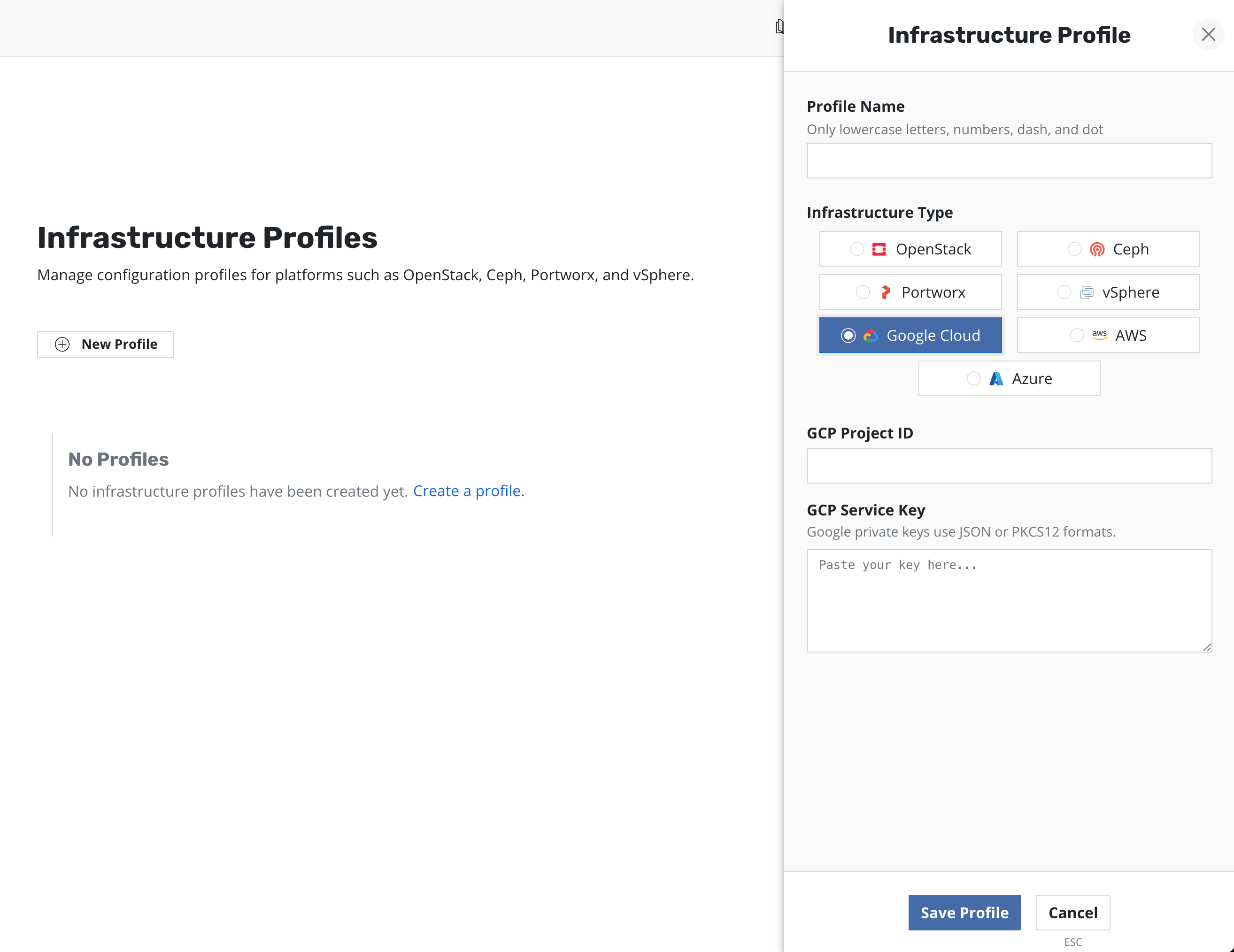 Currently, K10 also supports the legacy mode of providing Google credentials via Helm. In this case, a Google infrastructure profile will be created automatically with the values provided through Helm, and can be seen on the Dashboard. This profile can later be replaced or updated manually if necessary, such as when the credentials change.

In future releases, providing Google credential via Helm will be deprecated.

K10 currently supports Ceph RBD snapshots and backups. CephFS support is planned for the near future.

If you are using Rook to install Ceph, K10 only supports Rook v1.3.0 and above. Previous versions had bugs that prevented restore from snapshots.

K10 supports integration with Ceph (RBD) via its CSI interface by following the instructions for CSI integration. In particular, the Ceph VolumeSnapshotClass needs to be edited using the following commands.

An infrastructure profile must be created from the Settings menu. 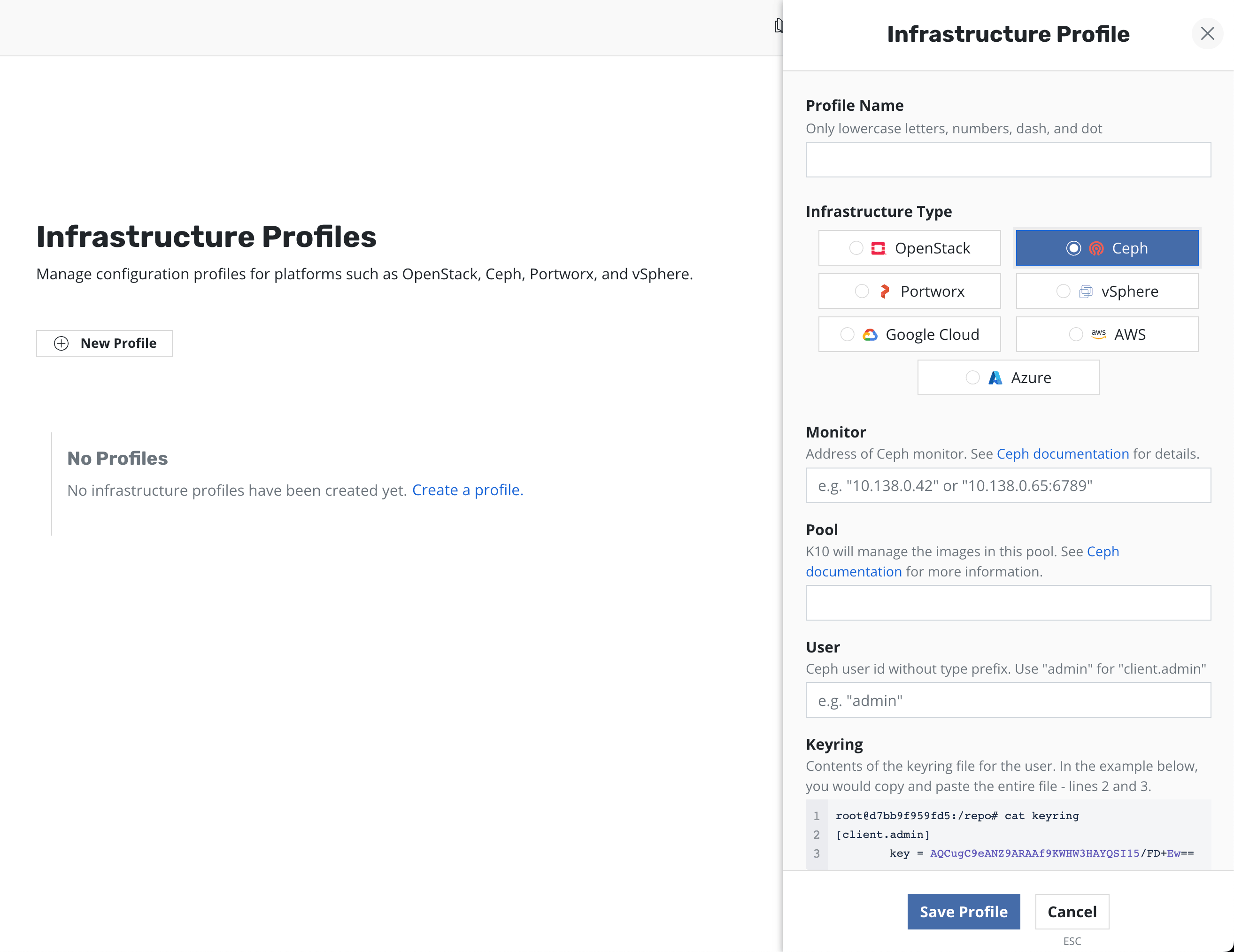 The Monitor, Pool, User and Keyring fields must be specified.

To enable K10 to take snapshots, an OpenStack infrastructure profile must be created from the settings menu. 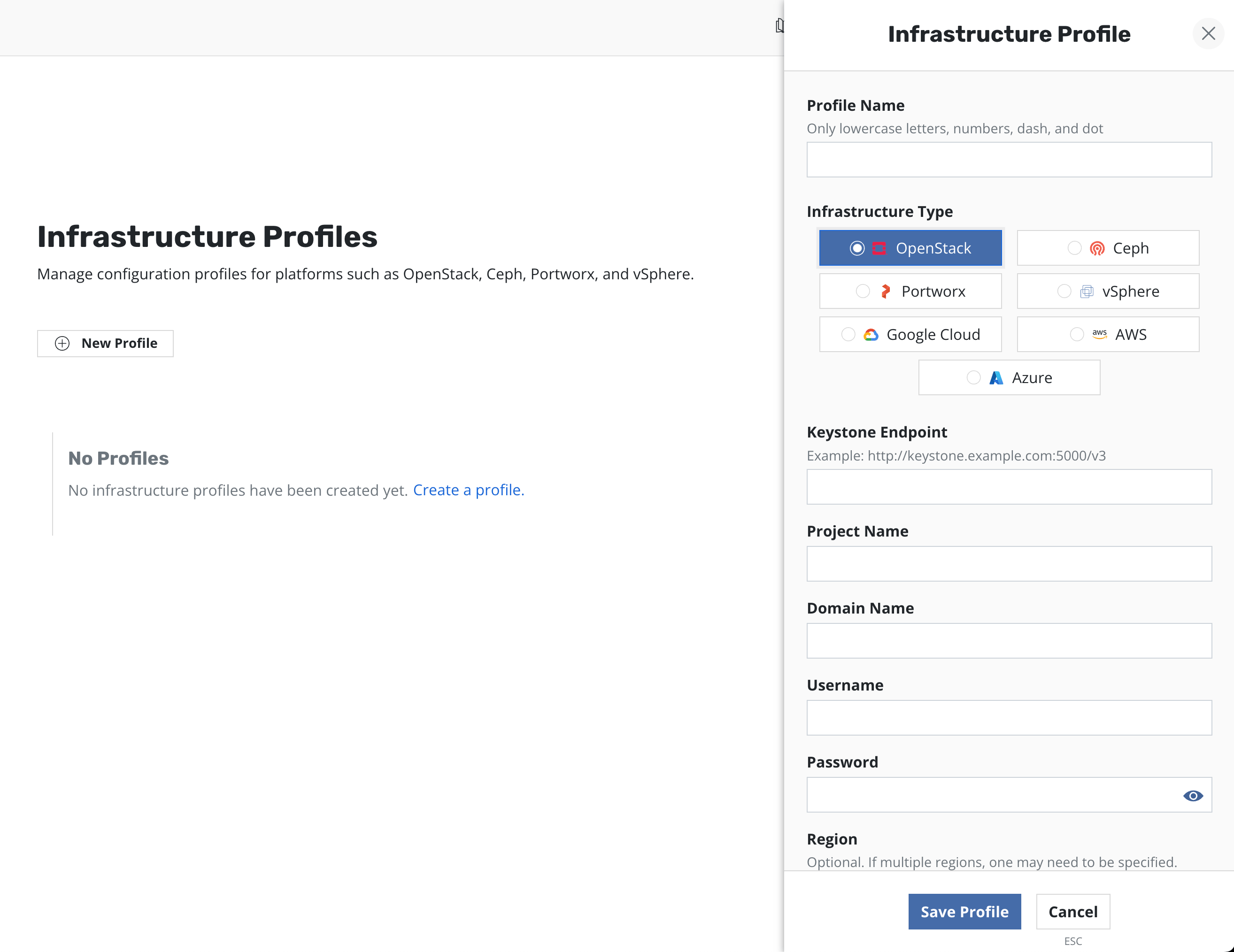 The Keystone Endpoint, Project Name, Domain Name, Username and Password are required fields. If the OpenStack environment spans multiple regions then the Region field must also be specified.

K10 supports vSphere storage integration and can be enabled by creating a vSphere infrastructure profile from the Settings menu. Persistent Volumes must be provisioned using the vSphere CSI provisioner. 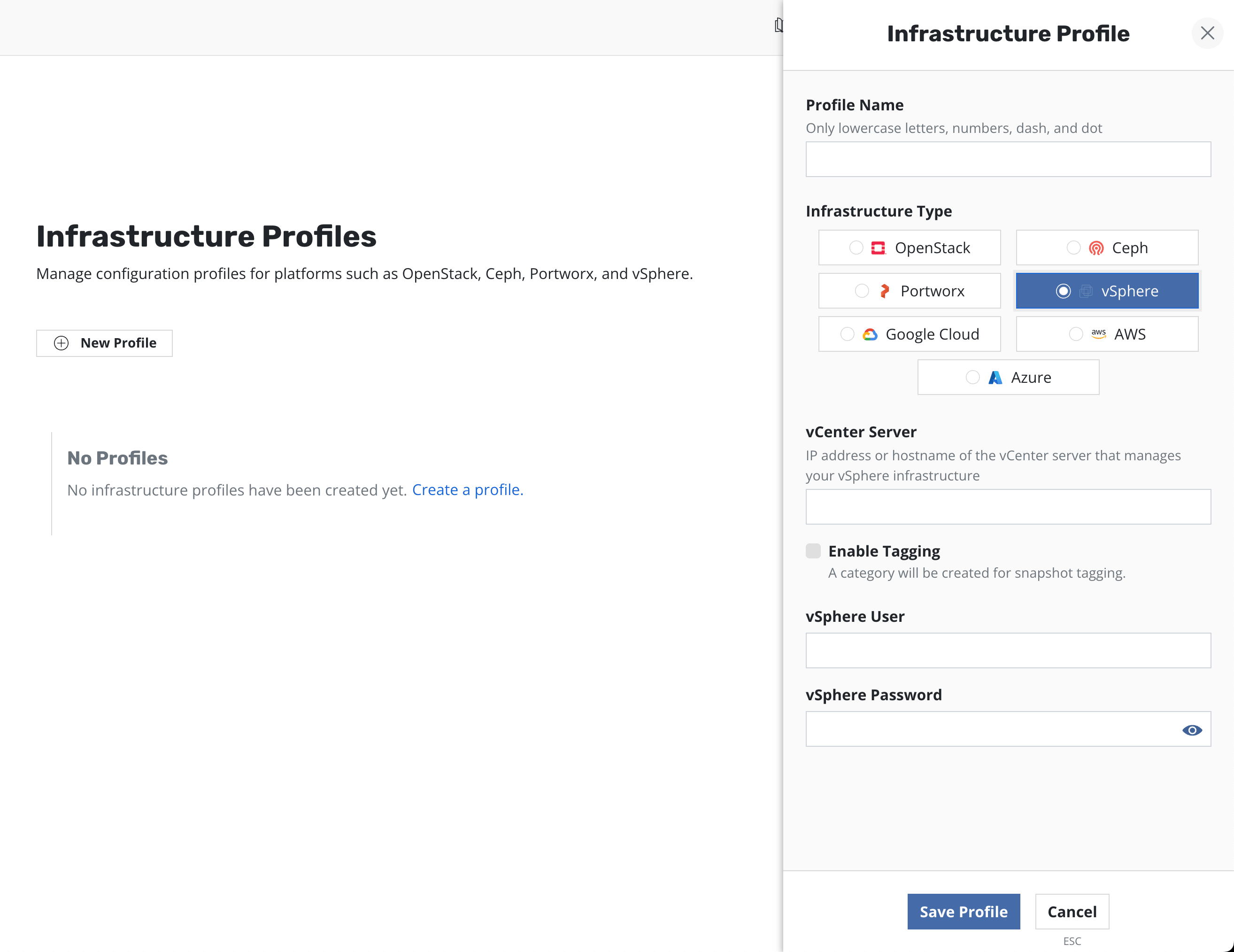 The vCenter Server is required and must be a valid IP address or hostname that points to the vSphere infrastructure. The vSphere User and vSphere Password fields are also required.

The Enable Tagging check box allows us to tag snapshots. This will aid in identifying snapshots taken by K10. If it is enabled, a vSphere tagging category will be created and displayed under Infrastructure Profiles.

It is recommended that a dedicated user account be created for K10. To authorize the account, create a role with the following privileges:

To enable tagging the following privileges must be set:

Assign this role to the dedicated K10 user account on the following objects:

The K10 default timeout for vSphere snapshot related operations may be too short if you are dealing with very large volumes. If you encounter timeout errors then adjust the vmWare.taskTimeoutMin Helm option accordingly.

You may observe that an application's PersistentVolumes do not get deleted even if their Reclaim Policy is Delete. This can happen when using K10 to restore an application in the same namespace or when deleting or uninstalling an application previously backed up by K10.

This is because the VMware CSI driver fails in the deletion of PersistentVolumes containing snapshots: a VMware snapshot is embedded in its associated FCD volume and does not exist independent of this volume, and it is not possible to delete an FCD volume if it has snapshots. The VMware CSI driver leaves such PersistentVolumes in the Released state with a "failed to delete volume" warning (visible with kubectl describe). You may also see errors flagged for this operation in the vCenter GUI. The driver re-attempts the deletion operation periodically, so when all snapshots get deleted the PersistentVolume will eventually be deleted. One can also attempt to manually delete the PersistentVolume again at this time.

When uninstalling or deleting an application, do not force delete Kubernetes PersistentVolume objects in the Released state as this would orphan the associated FCD volumes! Instead, use the vCenter GUI or a CLI tool like govc to manually delete the snapshots.

To enable K10 to take snapshots and restore volumes from Portworx, an infrastructure profile must be created from the settings menu. 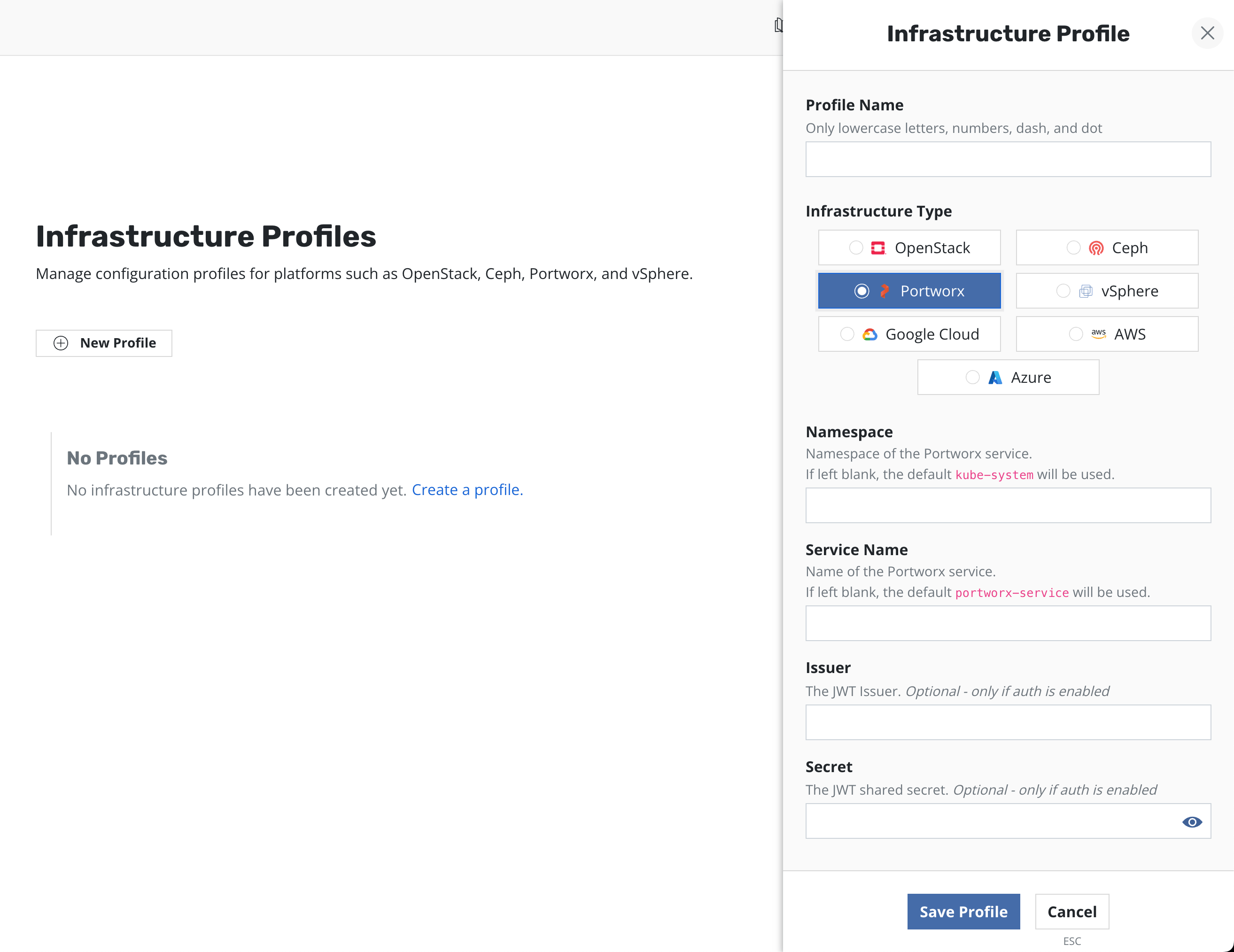 The Namespace and Service Name fields are used to determine the Portworx endpoint. If these fields are left blank the Portworx defaults of kube-system and portworx-service will be used respectively.

In an authorization-enabled Portworx setup, the Issuer and Secret fields must be set. The Issuer must represent the JWT issuer. The Secret is the JWT shared secret, which is represented by the Portworx environment variable- PORTWORX_AUTH_JWT_SHAREDSECRET. Refer to Portworx Security for more information.

A Veeam Backup Repository can be used as the destination for exported snapshot data from persistent volumes provisioned by the vSphere CSI provider in supported vSphere clusters. See the Integration with Veeam Backup Repositories for Kasten K10 Guide for additional details, including the Veeam user account permissions needed, network ports used and licensing information.

A Veeam Backup Repository Location Profile cannot be used as a destination for Kanister actions in a Backup policy.

Snapshot data is accessed in block mode directly through the VMware VDDK API. If change block tracking is enabled in the VMware cluster nodes, K10 will send incremental changes to the Veeam Backup Server if possible; if incremental upload is not possible a full backup will be done each export. Regardless, K10 will convert Veeam restore points into a synthetic full to satisfy K10 retirement functionality.